The following is just a small selection of poems from An Otley Run.

Overture is an introduction to the pubs and people of the Otley Run. Woodies and The Three Horseshoes are the beginning of our story, and The Library is a piece set in pub number ten. If you enjoy these extracts and would like to buy a copy of the book, click here.

Woodies.
That’s where you start, and we’ll have no arguing
about the Stables or the Village.
Those aren’t pubs, they’re hotels.
And be there by two o’clock, latest,
if you want to make it through alive.

The Three Horseshoes.
You might hear the mumbling,
the locals grumbling under their breath,
as if they weren’t used to this by now.
As if their pub didn’t depend on you.

The New Inn.
Here we must mention the costumes,
as you drink by the roadside
as Snow White or Julius Caesar.
In my day it wouldn’t have crossed our minds.
It’s all but mandatory now.

Arcadia?
Forget it.
No large groups, no fancy dress.
You are not welcome here.
The regulars chuckle as eight James Bonds
are ejected for dressing too smart.

At this point Darth Vader will suggest
the Arc, the Taps or Trio.
Some will shun the Dark Side.
Not on the Otley Road, not on the Otley Run.
Stay as you are, and head for The Box
for the next one.

The Skyrack and the Oak.
The beating hearts of Headingley.
Take them in the order you choose,
with a hop across the road,
a cheer for Fred Flintstone,
who won’t wait for the lights to change.

The Hyde Park.
It’s a fair walk for ten Where’s Wallys,
cloned in single file.
There’s only supposed to be one of him, idiots.
That’s the whole fucking point.

The Library.
Are you sick by now? Are you tired?
Are you wishing you hadn’t agreed to this?
Elvis is face down on the table,
and if he doesn’t die in the toilet
you’ll have to prop him up when he leaves the building.

The Pack Horse.
The group has thinned out,
thanks to dropouts and dawdlers.
You still barely fit into this place.
Cleopatra vomits into her handbag.

The Eldon.
Finally someone asks:
Is coming, blacked up,
as the Jamaican bobsleigh team
just a little bit racist?

The Fenton and Strawbs.
Neighbours on the home straight.
Just to get this far
makes you some kind of winner,
like the guy copping off with Catwoman,
despite being dressed as a Teletubby.

The Dry Dock.
This, I suggest, should be your final port.
And even if Superman still has his strength
and Tinkerbell’s wings aren’t broken,
please ignore Lord Vader and his latest bright idea:
‘Let’s go to Pryzm!’ 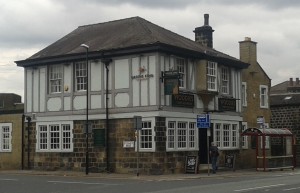 I’m the first one here.
I knew I would be.
Not even early, just on time,
but the lads are always late.
They’ll be watching the match,
waiting for the whistle
that says they can leave the sofa.

I buy a pint and sit on my own
at the biggest table in the pub.
I sip and wait, wait and sip,
feeling a clown in my home-made toga.
Eventually the lads show up
in twos and threes and fours,
and I relax a little, now I’m not
the only Roman in the room.
Or are we supposed to be Greeks?
I don’t think we ever specified,
and I don’t think this lot care.

Ash is last, as usual.
The first thing he says
is, ‘Nice tits!’ to the girl on the bar,
who doesn’t react except to make sure
he’s the last one to be served.

I’m already thinking
I should have come up
with some sort of excuse.

I’m already thinking
I should have come up
with some sort of excuse.

We’re only on our second drink
and my cowgirl chaps are pissing me off.
I thought I’d be comfortable wearing this.
I was wrong.
At least I’m not showing off half my arse
like Sarah the fairy fucking queen,
or her, there, Maria Sharapova,
whatever her real name is.

I’d hoped there’d be more folk I know,
but there’s only Sarah and Rachael,
nobody else from the office.
Mostly Sarah’s friends from school or uni,
a couple of cousins, her mum.
It’s Sam, her mum. Or is it Pam?
Whatever it is, I’m glad she’s here.
Saves me from being the only one over thirty
and not dressed like a prostitute.
Even Rachael’s surprised me with that dress,
those black cat ears.

The naughty nurse is Charlie —
Charlotte to mummy and daddy, I’d bet —
maid of honour, as she’s told us fifty times.
I don’t think we’re going to get on, but
she’s got the rest of the day to prove me wrong.

I thought it’d all be pissheads and twats,
but there’s normal people in here.
A big group there, students I guess,
led by the pink bloody panther.
But normal people as well.

It’s alright, this place.
That first one wasn’t bad either.
Just as I think it, in comes a group,
lads all dressed in home-made togas,
supposed to be Greeks or Romans,
I don’t know.

By the time they sit down I know — wankers.
The biggest and loudest one’s shouting a song
from the football or something,
his mates all laughing.

I’m glad when it’s time to move on.
I hope to hell we’re not going to
see much more of them. 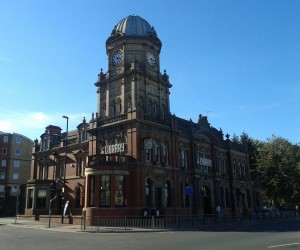 For those still standing
another chapter begins,
but the spark is gone.
Orders grow weary, slurred,
rounds get cheaper,
as twelve turn to nine,
ten become eight.

The fallen forgotten.
No toast, no eulogy.
Instead they lament the loss
of a plastic trident,
as a solo deely bopper
bobs in mourning for its partner,
gone, who knows where.

Survivors try to revive wounded comrades.
Testosterone trials, bottles of bubbles,
an arm wrestle here, a cork popping there,
but there’s medicine left undrunk,
and that might be their saviour.

Here and there a hip shakes
to music that’s trying to say
this is just the beginning.
Amid cheers and jeers
and shattering glass,
boys try with girls
and girls turn away,
their phones demanding attention.
The boys move on.

Or there might be a smile,
a twist of the shoulder,
a straw sucked eye to eye,
and maybe later, just maybe,
she’ll think about sharing her number,
a kiss, or more.

Then the Generals command, advance,
it’s time to go, push on, move out,
and through the sudden rain
they run.