Here you can find out about the pubs on the Otley Run, and some of the other places of interest that can be seen along the route of the pub crawl and nearby.

The usual starting point for an Otley Run is Woodies in Far Headingley. Until the 1980s it was named The Woodman. It is popular with staff and students from Leeds Beckett University, whose Headingley Campus is nearby.

Across the road from Woodies, through a hedged archway, you can find St Chad’s Garden of Rest and the Headingley Community Orchard.

The second pub is The Three Horseshoes, just a few doors down from Woodies. For a very brief period in 2015, the owners changed its name to The Industrialist, but the original name was quickly restored after a public outcry. 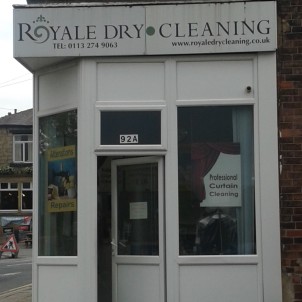 Royale Dry Cleaning may not look very interesting, but writer Alan Bennett lived here as a child, when his father ran a butcher’s shop here.

The Cottage Road cinema, just off Otley Road, is the oldest continually operating cinema in Leeds. It originally opened as the Headingley Picture House in 1912.

Pub number three is the New Inn, which was rebranded as O’Hagan’s New Inn for a period in the late nineties, cashing in on the craze for Irish themed pubs. 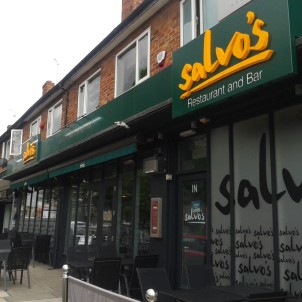 Although not a typical destination for Otley Runners, Salvo’s is one of the most famous restaurants in Leeds and has won many awards. 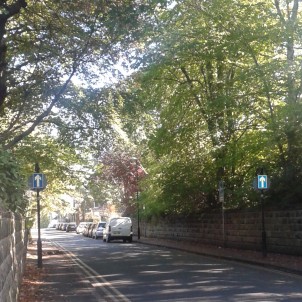 Alma Road, off Otley Road, looks like an ordinary leafy suburban street, but it has a grizzly part in the history of Leeds. The Yorkshire Ripper, Peter Sutcliffe, murdered Jacqueline Hill here in 1980. She was his last known victim. 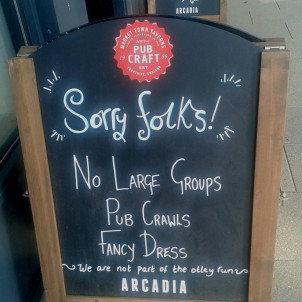 Not all of the pubs on Otley Road welcome Otley Runners. This sign outside Arcadia makes their position clear.

The Arndale Centre is the main shopping area in Headingley. The Premier Inn is a recent addition useful to Otley Runners, opening in 2018. 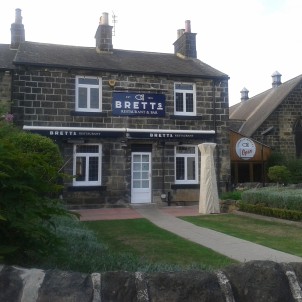 Brett’s is another of Headingley’s well-known restaurants, serving award-winning fish and chips. 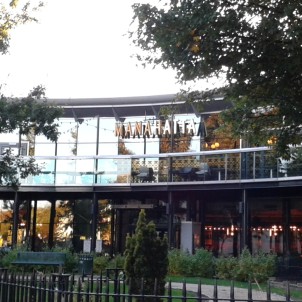 Arc, which rebranded as Manahatta in 2018, caused controversy when it opened in 2000, on the site of the former Lounge Cinema. It was the first venue in the portfolio of local chain Arc Inspirations.

The Headingley Taps opened in 1994. The building was previously a water pumping station dating back to the 1870s, and is now a listed building. 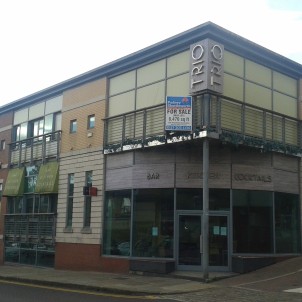 The basement bar in Trio was an optional extra frequented by some Otley Runners, until it closed suddenly in 2018. The premises are currently unoccupied. 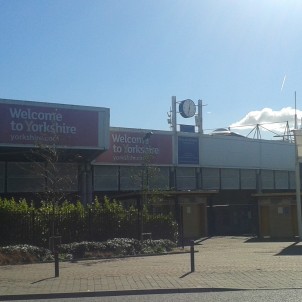 As well as Otley Runners, the pubs of Headingley are popular with rugby and cricket fans visiting Headingley Stadium. The stadium is home to Yorkshire County Cricket Club, the Leeds Rhinos, and Yorkshire Carnegie. 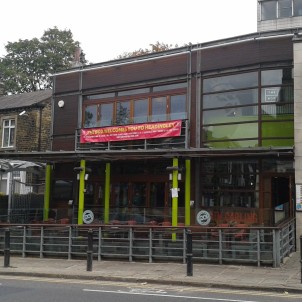 The Box is the newest pub on the Otley Run. It opened in 2002 and is another Arc Inspirations bar. 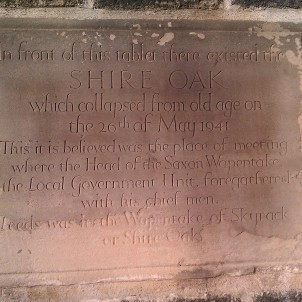 This plaque, on the wall outside the Original Oak, marks the site of the Shire Oak. The Original Oak and the Skyrack both take their names from this ancient tree.

As well as being an Otley Run pub, The Skyrack is a popular place to watch sport on television. At one time it was said to have the highest turnover of any pub in England.

The Headingley War Memorial, outside St Michael’s Church, lists the names of people from Headingley who died in the First World War 1914-1918. 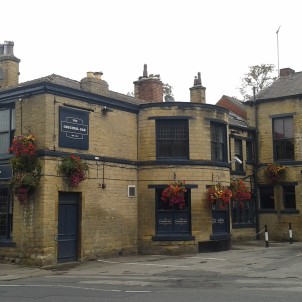 The Original Oak is particularly popular in the summer because of its large beer garden, which features an outdoor big screen for sports events. Until the mid 90s, the garden area was a bowling green, used by the Original Oak Bowling Club.

Set back from Otley Road, the imposing Hinsley Hall was built in 1867. It is now a conference centre owned by the Catholic Diocese of Leeds. 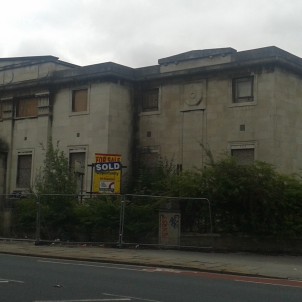 Another example of striking architecture, the neo-classical Elinor Lupton Centre is now sadly derelict. JD Wetherspoon have been trying to open a new pub here for several years, but their licensing application has been rejected. The building was previously part of Leeds Girls High School.

The Headingley Hill Congregational Church, also currently vacant, was built in the 1860s by Leeds architect Cuthbert Brodrick, who designed many of the city’s best-known buildings. 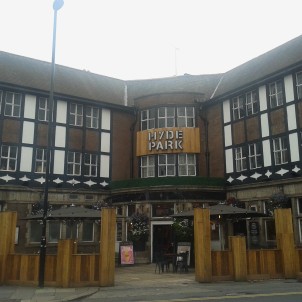 The prominent corner location of the Hyde Park pub makes it a familiar landmark when heading north towards Headingley. 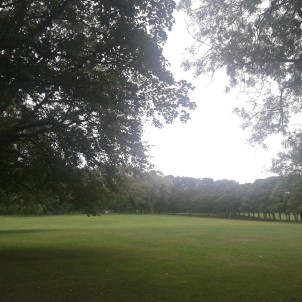 Woodhouse Moor is one of the largest public parks in Leeds. It is the venue for events including the annual Unity Day community festival, and a weekly Parkrun.

George Frampton’s impressive statue of Queen Victoria, at the southeast corner of Woodhouse Moor near the Library pub, originally stood outside Leeds Town Hall, before being moved to its present location in 1937. 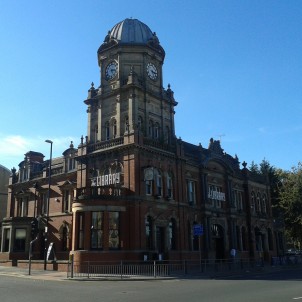 The building that houses The Library pub has previously served as government offices, a police and fire station, as well as a library. It became a pub in 1994 when it opened as the Feast & Firkin, and has been The Library since 2000.

Opposite The Library stands a statue of HR Marsden, a Liberal mayor of Leeds in the 1870s. The statue marks the starting point of the Meanwood Valley Trail, a popular walking route. 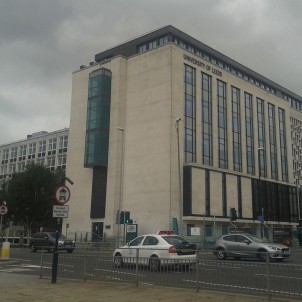 Beyond Woodhouse Moor is the city’s university district. The University of Leeds is one of the largest education institutions in the UK, with approximately 33,000 students. 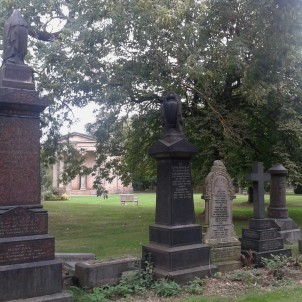 Hidden away off the main road among the university buildings, you can find the tranquil St George’s Fields, the location of Leeds General Cemetery, a private Victorian cemetery where many notable local figures are buried. 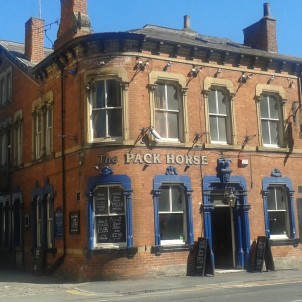 The Pack Horse is one of the oldest and most intimate pubs on the Otley Run, and a venue for live music and other events. At the time of writing (October 2018) it is temporarily closed following a change of ownership. 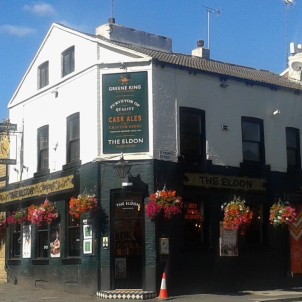 The location of The Eldon makes it a favourite for staff of the University of Leeds, and a popular meeting point for student societies. 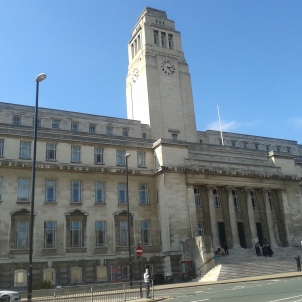 The Parkinson Building is one of Leeds’ most distinctive buildings, thanks to its tall clock tower which can be seen for miles around. It houses the university’s art gallery, which is open to the public. 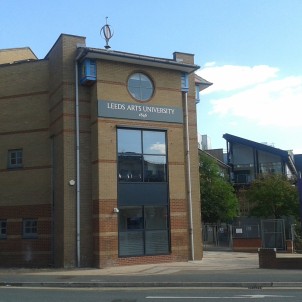 Leeds Arts University on Blenheim Walk is the newest of the city’s four universities. It gained university status in 2017, having previously been Leeds College of Art.

The final stretch of the Otley Run passes by a number of Leeds Civic Trust blue plaques. This one at 18 Blenheim Terrace marks the site of the Yorkshire Ladies’ Council of Education, founded in 1876 to promote the education of women and girls. The building is now part of the University of Leeds. 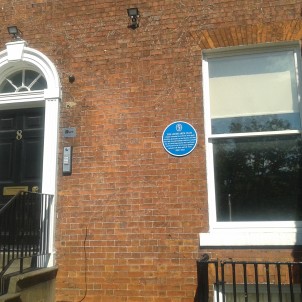 Blenheim Terrace has another blue plaque, at number 8. The influential Leeds Arts Club met here from 1908. 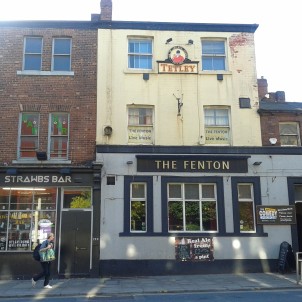 The Fenton and the tiny Strawbs Bar, also known as Strawberryfields, stand together at the southern edge of the University of Leeds campus. The sign on the Fenton’s wall is a reminder of the Tetley brewery which once dominated the city’s pub industry. At one time the Otley Run was entirely made up of Tetley pubs. 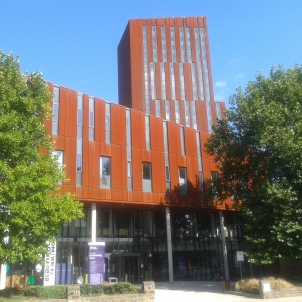 Old Broadcasting House, now owned by Leeds Beckett, was previously the home of the BBC’s Leeds studios. The blue plaque notes that it was originally the Carlton Hill Friends Meeting House, used by Quakers.

Leeds Beckett University’s Leslie Silver Building stands opposite the Dry Dock. To the left is the student union, once a popular final destination for Otley Runners, and remembered by 90s students as the home of the Poly Bop. 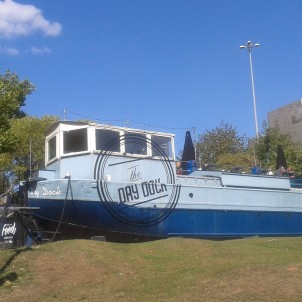 The Dry Dock opened in 1993, marking the beginning of the Otley Run’s expansion into the pub crawl we know today. Most of the pub is made from a converted river barge called the Lambda, which was relocated here following its retirement. This is usually the final pub of the Otley Run, and so this is the end of our tour.